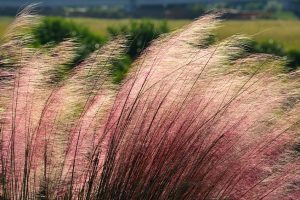 I get a lot of questions about ornamental grasses, but two come up more than any others. These are, “when should my grass be cut back,” and “when and how should my ornamental grass be divided?” I’ll cover these and other points in the following post.

Public interest in growing and cultivating ornamental grasses has increased dramatically in the last few years, probably because they are so versatile.

They can be planted anywhere and can be used to add colour, depth and dimensions to any garden setting. Along with the increased popularity of ornamental grasses has come a steady stream of questions about caring for them. 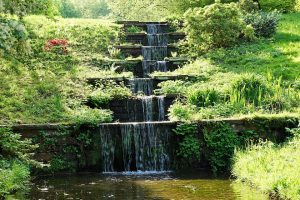 Two questions we are commonly asked include “Does ornamental grass need to be cut back and when?” and “How should I divide my ornamental grass and when?”. In the following article we will supply you with some essential rules of thumb for addressing these very points.

There are different classifications of grasses to be aware of when discussing these topics. Grasses can be cool evergreen, warm season or cool season. Cool season will do most of their growing during the cooler months like the spring before temperatures get higher than 75°F (23.8°C) and then again in the fall after temperatures have dropped once more. They will keep good colour if they are maintained well during the summer, but they won’t do much growth in higher temperatures.

Evergreen grasses are not actually grass per say. Instead, they are special plants that have an appearance of grass, like sedges or carex, but these aren’t grass.

The Rules of Thumb for Ornamental Grasses

I find that using a few rules of thumb adds great simplicity to what would otherwise be a lengthy scientific explanation, which could be hard to remember. I actually found the detail of ornamental grasses to b quite complex myself until I was able to simplify the information into a few rules of thumb that I have found pertain to most ornamental grasses.

Ornamental Grass Rule of Thumb No. 1 –– Warm season grasses should be cut back in fall or by mid to late spring.

Warm season grasses take on brownish hues when the temperatures drop in the winter. This is the perfect time to take care of any trimming jobs you’d like to do. If you have a fall routine for gardening or live in a place where fire is a risk, you can cut them till they are no more than a few inches tall.

If fire is not a big problem in your area you may choose to leave your ornamental grasses as they are with their seed heads as a winter spectacle. When these have been frosted over in the first chill of winter you will have a beautiful sight to enjoy. Then you can do the trimming in spring before they begin to grow gain. Cut them till they are just a couple of inches.

Not all ornamental grasses are a pretty sight in the winter, so keep the not-so-attractive ones trimmed down.

Ornamental Grass Rule of Thumb No.2 –– Cool season grasses must be cut back in the early spring

As the warm season grasses are turning brown, the cool season grasses will still stay green and bright over the winter. Leave their foliage as it is till the harsh winter cool has passed and spring arrives. Only remove about two thirds the length of the plant in place. It is important to be gentle and precise when trimming cool season grass as they can be damaged by mistreatment.
Now you have a basic idea of when ornamental grasses should be cut back. The next question is how to do this. Begin by grabbing a good pair of thick leather gardening gloves. Some of these ornamental grasses have very sharp edges and protection is vital. Smaller plants will only need a small pair of shears to trim away about 2/3 of the cool season grasses. For those that have grown especially long, it might be assist to grab all the leaves in a bundle and snip them all in one clean shot. This may not be possible with all plants as some have leaves that are shorter than others.

If you have a larger clump of well-established grasses you may need something a little more powerful. An electric or gas powered weed eater with a blade rather than the usual string is a good option. If necessary you can use a chainsaw but always use proper protection and try to tie up the grasses to get as much as you can in on slice. Many times a simple pair of hedge trimmers will be more than enough.

Dividing ornamental grasses is an important way to keep your grasses alive and growing without having to buy more. Dividing your grass can keep them alive and growing as opposed to going to simply dying out. Grass will begin to die out at their centre but a timely dividing will keep them rejuvenate the entire clump.

Ornamental Grass Rule of Thumb No. 3 –– Spring to mid-summer is the best time to divide warm season grasses

Ornamental grasses need to be properly growing when they are divided but before the grass has begun to flower. If you were to divide while the plant is still dormant it won’t grow proper roots to keep it strong and healthy. Warm season grass wakes up in the spring and is most active during the hotter summer months. Warm season grasses will bloom in mid-summer.

Ornamental Grass Rule of Thumb No. 4 –– Cool season grasses should be divided in the spring or early fall

The spring and fall are the active growing times for cool season grasses. They can also be transplanted at either time of the year but there is some reason to do this during the spring. If you try and transplant in the fall you run the risk of winter chills. I had a couple of coral bells out of the ground for transplanting and were struck by an early frost –– they didn’t survive and I was sad.

Ornamental Grass Rule of Thumb No. 5 –– Evergreen grasses and other grass-like plants should be divided in the spring.

Evergreen plants aren’t like other plants and never really go dormant. But, when you divide an evergreen grass it is essentially inflicting a wound on the plant. This injury can affect the plant’s capacity to survive through the harsh winter.

How exactly do you divide a grass?

The process is very simple and a lot like dividing a perennial. First you must dig the grass up and then cut the clump into as many portions as you can but each must have some roots to sustain their life. Use the sharp edge of a trowel, a knife, pruning shears to dissect the clump of roots.

Make sure you plant the grasses again once you have finished before their roots become damaged through exposure to sunlight and air. You may even want to cover them until you do especially if the day is sunny.

Finally, they are not called “blades” of grass for nothing and a grass cut can slice deep and ugly (it’s happened to me and it hurts), protect your tender fingers with proper gloves.