Until quite recently it was the only variety of Hydrangea arborescens that was recognized by the general public and readily available in garden centers.

Annabelle Smooth Hydrangea features stunning white flowers that frequently feature heads that are greater than 10 inches in diameter. Annabelle, unlike the better known pink and blue hydrangeas (macrophyllas), blooms each year, even following intensely cold winters or severe pruning. The white, big “drumstick” blooms appear without fail in profusion. Some individuals plant ‘Annabelle’ in the form of a hedge given that it can be severely cut back during the winter to give it a tidy appearance.

‘Annabelle’ provides a spectacular display in colder areas along with warm regions. We have seen reports that it is even hardy in Zones 3 and 2 in the United States (rate officially to Zone 3). There are kinds of Hydrangea arborescens that are native to eastern regions of the United States. If the climate in your area is too harsh for growing macrophyllas, then ‘Annabelle’ is a great alternative to consider.

Care Of The Annabelle Hydrangea

Like most of the other hydrangeas, the Annabelle prefers morning sun and dappled shade all day or afternoon shade, especially in the south. Annabelle does very well in all day sun in northern parts of the U.S. According to some books it does better in heavy shady compared to other hydrangeas, but we haven’t found this to be true. The more morning sun that it gets the better that it blooms for us. Arborescens thrive both in the deep south and cold northern climates (Zones 8-3).

How To Support The Droopy, Heavy Bloom Heads Of The Annabelle 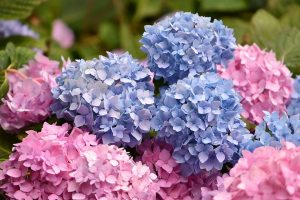 Everybody who grows this gorgeous hydrangea knows that this is a really important challenge. Annabelle’s blooms are so big that they have a tendency to bend all the way to the ground following a rain. It can become such a severe problem that the entire shrub gets flattened. The following are a few tips that you can use with all big blooming arborescens in order to reduce the problem or eliminate it completely.

1. Plant your Annabelles close to a decorative fence. It is one of the best ideas that we have come across for taking the Hydrangea arborescens heavy blooms.

2. Plant three Annabelle shrubs together at least. As the Annabelle matures they grow together and somewhat support each other. Plant them approximately three or four feet apart.

3. Only sparingly prune your plants. If your hydrangeas have a tendency to flatten during the rain, it might help with pruning Annabelle to around 18″ to 24″ tall instead of cutting them to the ground each year. That will enable the stems to thicken a bit every year, which becomes stouter and allow the blooms and other branches to support them better. Also, the heads become more plentiful but a bit smaller (not too small so that you are disappointed). These sightly small heads are not as likely to droop. In more northern areas, you might not be able to use this particular tip. Annabelle stems might not survive the winter, and therefore, they will be new each year from the ground.

4. Place a short wire fence around every plant. If you surround young Annabelle plants with wire fences before they put new branches out in the spring, then it will keep the blooms off of the ground. Quite often garden centers sell green wire short (18″) fencing to line flower beds. Cut them into lengths that encircle the base of your Annabelle plant (similar to a short tomato cage). Once the Anabelle leafs out, it completely hides the wire.

Every year the Annabelle Hydrangea grows its blooms on new wood. The shrubs are vigorous bloomers and are able to handle aggressive pruning. As stated above, however, just prune to 18″ to 24″ if you want your plants to have stronger limbs. However, you can prune all the way back to the ground every year and those incredible plant will bounce back no problem with beautiful flowers. The only time that you shouldn’t spring during the spring, since this when the shrubs are preparing to do their blooming.

Spacing Of The Annabelle Hydrangea

If you are planning to plant a hedge or would like the shrubs to connect and also help to support one another, then plant them 3 or 4 feet apart. Or plant, shrubs 5 to 6 feet apart.